A worthy way to die… 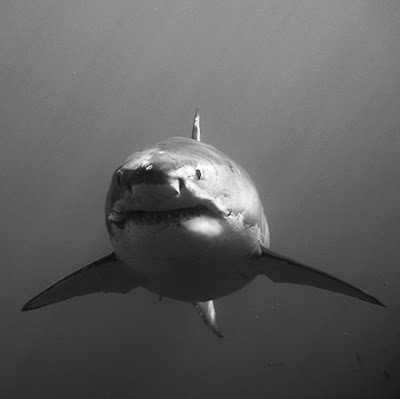 As a surfer, hearing about a deadly shark attack (Last week on the Central Coast) strikes a certain chord in my soul.  No surfer alive hasn’t been spooked at the thought of being fish food at one time or another.

During my years exploring the Oregon coast, I came to the conclusion that being attacked by a shark is a worthy way to die.  Maybe it was just a way to reassure myself on those freezing, grey, murky days when I was wishing there was just one other person in the line-up to give me at least a 50% chance of not being dinner for Jaws. Or maybe I was on to something.  Being eaten by one of natures most evolved and powerful predators should be an honor.  Sure, you’d probably shit your wetsuit, scream like a 10 year old girl and go into shock before you knew what happened, but it sure beats having some knucklehead swerve into you head-on while he’s sending some lame text to his girlfriend.  Or having a bus run you over while enjoying a stroll with your morning coffee.  Or even getting hit in the head by your board and drowning.

I’d rather come face to face with Mr. White and go down fighting in a pool of my own blood than die in some drunken trip down a stairwell any day.  It’s the ultimate way to go for someone who uses the ocean to fulfill their passion.  I think it’s a fair trade.  There’s nothing wrong with dying while doing what you love.  The lifestyle of surfing is worth the risk… it’s worth dying for.  So when I hear of a surfer dying in a shark attack, I think they should be honored as a sacrifice to the surf gods.

Join the Newsletter for 20% off all prints through 5/26. Free shipping in the USA!*