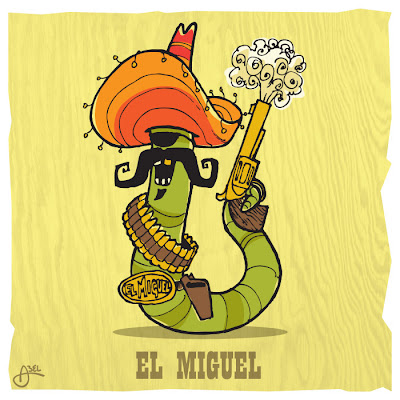 I sure hope this won’t be my last post.  Tomorrow morning a giant posse will board multiple aircraft bound for Cabo San Lucas, Mexico to celebrate three 30th birthdays(Mine included… shit!) and one 31st (Ol’ Man Baldwin) during the following 7 days.  I’m scared.  14 or 15 of us all in one little Mexican town with bottomless tequila and swim-up bars, not the best combo. One friend finally decided to come just because he said he couldn’t miss my 30th birthday and my death all at the same time. Hmmm… wish me luck, things are pretty much guaranteed to get weird.

And you may ask who the hell is El Miguel?  El Miguel is our mascot/tour guide for the following week of madness.  A drunk and blind Tequila worm, his family brutally murdered and himself left to drown in the bottom of a bottle of Tequila, luckily he was able to drink his way out of it and survive, but it left him with a crazy spiral eye that casts a curse on all those who dare to flip up his patch and stare into it. People have been known to get excruciating headaches from this curse, others have ended up naked in strange places with strange naked people. Go figure.

Aedion Aesthetic kingpin Kevin McNally was able to chat with El Miguel over the phone the other day, here’s a partial interview: (The talk ended abruptly when a disagreement broke out between El Miguel and some spike haired, frosted tip, Abercrombie & Fitch wearing spring breakers over a bar tab, sources tell us El Miguel shot all 9 of them on the spot)

KM:
El Miguel, what would you say to the rumors that the tequila worm, is nothing more than a myth.

El Miguel: (In a very Raspy Mexican Accent)
I would say, do I look like a Myth!?! Look at me here, I sit, my eye burned out by fat drunken frat boy in Cancun… Spring break 2007… the last day I see. Removed from my family in Oaxaca and bottled to be sold. You want to talk about a myth. Lets talk about the Female orgasm… now that’s a MYTH.

KM:
How old were you when you were taken?

El Miguel:
I must have been 7 or 8 weeks, that’s like 27 in human years. They came through our village… pulled up our houses. I tried hard to bit them, but they took me away. Mi familia, I have not seen since. Now I have pistola, and when I find the men who took me. I will find my revenge.

KM:
Where is your family now.

El Miguel:
I do not know. My wife and daughters were most likely killed by Cuervo’s Men, however I hope my son lives on.

KM:
You mentioned to me earlier that he had an unusual name and said there was a story behind it?

El Miguel:
Yes, yes he was born on the day of Black, the day Johnny Cash died. So in honor of Senior Cash I named him… [long pause]…. Que? What the hell this??  They what? Put drinks on MY tab??? PUTOS… [several gun shots, dial tone]

Free shipping in the USA!*